The 25th of April saw the end of the Season for Brackley Town and the usual Summer Tournament took place. This year we saw 26 people taking part across 13 teams.

Group A consisting of Ben & JJ, Dan & Joe, Maire & Hassi and Kaajal & Marcus. Ben and JJ got off to a good start, beating Dan and Joe. Ben and JJ then went on to beat the other two pairs in the group 21-14 and 21-17 to secure the top spot in their Group.  Dan and Joe bounced back from their first round defeat to beat Kajaal and Marcus and Maire and Hassi to confirm themselves a 2nd place finish. Maire and Hassi missed on on 2nd place due to losing their final game to Dan and Joe after beating Kaajal and Marcus.

Group B was one of three groups with just three team, Connor & Dave, Tim & Muhub and Robby and Chris K. Connor and Dave won both their games in the group to finish top, and the battle for 2nd was won by Tim and Muhib.

Group C was won by Richard & Calvin, they easily dispatched Tom E & Chris B and Eoin & Rachel to secure top spot. Tom and Chris were able to narrowly squeeze through in 2nd place by beating Eoin and Rachel 22-20.

Group D saw history being made for the club, the first ever all female pairing of Molly & Jess.  Molly was hammered by Henry sabotaging her effort by borrowing her racket and breaking the strings and so she had to play with her spare. Henry and Paula were able to win the group, winning both their games and Sarah & Tom S were able to sneak the win over the Brackley History Makers 24-22. Despite best efforts to appeal to Eoin, Henry was cleared of any wrong doing and progressed.

The quarter finals saw Group A winners Joe and Ben play Group B runners up Muhib and Tim. Joe and Ben were unable to continue their dominance in the group and fell to a 21-18 defeat. Group A Runners Up Dane and Joe lost out to group B winners Connor and Dave. Group C winners Calvin and Richard beat Sarah and Tom S the Group D Runners Up to progress in to the Semi Finals and the final quarter final match was  Group C rubbers up Tom E and Chris Brown against Henry and Paula the winners of Group D with Henry and Paula coming out on top.

This set up the semi-finals between Tim & Muhib vs Calvin & Richard in the first Semi-final and Connor & Dave vs Henry & Paula in the second. Tim and Muhib were able to over come Calvin and Richard too book their place in the final 21-19. Connor & Dave soon joined them, beating Henry and Paula 21-17.

Connor and Dave stepped up a gear in the final, and dispatched Tim and Muhib 21-9 giving Connor back to back Summer tournament wins. Calvin and Richard performed admirably to win the 3rd place play off 21-14. 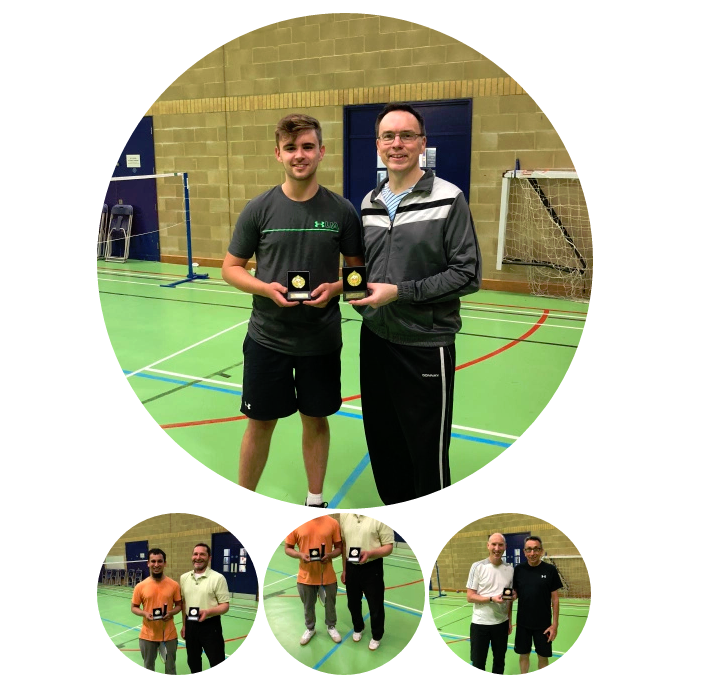